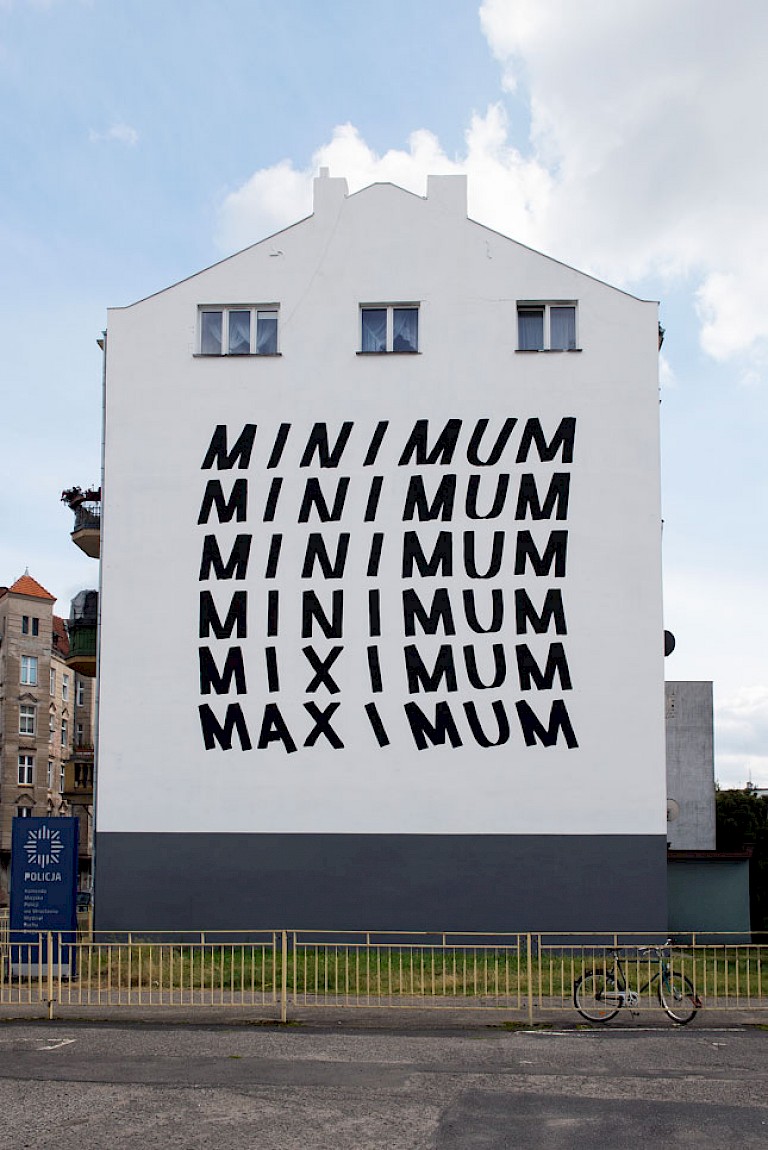 Wrocław (known as Breslau in German) is the fourth-largest city in Poland, located in the southwest of the country. First recorded in the 10th century (although Slavic settlements in the area appeared as early as the 6th century, and a Roman settlement was known there dating back to the 2nd century AD), the city has a rich and complex history. It was part of the Polish Kingdom, the Kingdom of Bohemia (of the Holy Roman Empire), and the Kingdom of Prussia — becoming the sixth largest city in the German Empire after the Unification of Germany in 1871. After World War II, the city became part of Poland, and the name «Wrocław» was declared official. In August 1945, the city had a German population of 189,500, and a Polish population of 17,000. According to the decrees of the new administration, almost all of the German inhabitants were forced to leave the territory, and were replaced by the Polish population that had been deported from the eastern Polish lands annexed by the Soviet Union. Therefore, Wrocław remains a place of complicated legacy and mixed heritage, combining medieval architecture with impressive become familiar with the genre of concrete poetry, he identified his practice with it.

This is how he interpreted his practice later: «concrete poetry consists in isolating the word, making it autonomous. In isolating it from the linguistic context, as well as from the context of the non-linguistic reality, so as to make the word signify in itself and unto itself. In concrete poetry form is determined by content, and content by form. Traditional poetry describes an image. Concrete poetry writes with it.» In 2003 Stanisław Dróżdż represented Poland at the 50th Venice Biennale with his work Alea iacta est.

The walls of the pavilion were covered with about 250,000 slightly enlarged (3x3 cm) rolling dice, demonstrating all the possible combinations that can be obtained by throwing a set of six dice. In the centre of the space stood a billiard table with exactly such a set. In a user manual printed in 40 languages the artist invited the viewer to roll the dice and then find the combination obtained among the 46,656 possible results on the wall. This example provides a very particular insight into the overall conceptual interests of the artist. Generally, the works by Dróżdż came about as texts on two-dimensional surface and texts in three-dimensional space — they were realized in the form of manuscripts, photographic prints, computer prints and spatial installations.

For «Text Paths», Małgorzata Dawidek implanted them into the public spaces of Wroclaw in the form of murals, installations, and posters, creating new modes of existence for the poetry of Stanisław Dróżdż. Three of the works, «optimum» (1967), «Forgetting» (1967), and «Temporally-spatially» (1969), were presented as murals (the former on Hubska street, the two latter on Legnicka street respectively). «optimum» consists of two antonyms understood in many languages: «minimum» and «maximum». The piece presents the process of transforming one word into the other. As a result of changing letters, the words are being substituted with their opposites — the work emphasises the unclear meaning of both notions, while its title offers a balance between them.

The work «Forgetting» literally depicts the process of forgetting, visualised by reducing the letters making up the word «Zapominanie» («Forgetting» in Polish). Line after line, the word loses letters, until all that is left is a singular dot, a trace left by writing. «Forgetting» shows the act of memory's 1 https://monoskop.org/Stanisław_Dróżdż reduction and transformation, along with the impossibility of retrieving lost reminiscences. The composition of «Temporally-spatially» is based on the arrangement of two letters forming two words with opposite meanings — Polish prepositions «do» (which means «to») and «od» («from»). The title of the work suggests that the words used in it have both temporal and spatial meanings, pertaining to distance, length and duration. The graphic forms for «optimum» and «Forgetting» were developed by the poet and painter Stanisław Kortyka back in 1967; «Temporally-spatially» was graphically designed by the conceptual artist Barbara Kozłowska in 1969.

The second part of the project presents the spatial interpretation of Stanisław Dróżdż’s piece «Loneliness», designed by Barbara Kozłowska in 1970. The work consists of 45 concrete blocks; each of them in the form of the digit «1». The digit is separated from its numerical aspect and becomes a lyrical sign, representing loneliness in a crowd — or singularity. The third part of «Text Paths» is based on the new publication of Stanisław Dróżdż’s first volume of verse, «Inwards beyond the words between» (1969). Compiled and edited by Małgorzata Dawidek and translated into English by Krzysztof Bartnicki, the volume was published by Warstwy in September 2016.

Simultaneously, in September and October, reproductions of selected pages of the publication were featured as city light posters at 42 tram stops all over Wrocław as well as in the street gallery Szewska Pasja in Szewska Street. «Text Paths» project was a vivid experiment in creating an organic place for the minimalist poetic language in the historically and culturally oversaturated public spaces of Wrocław, launching an altogether different symbolic order from within. It was a manifest of urban interconnectedness and a bold move against aesthetic hierarchies, providing avant-garde art with the outputs it had always claimed — making it accessible to every spectator and open to the productive contingency of random encounters. 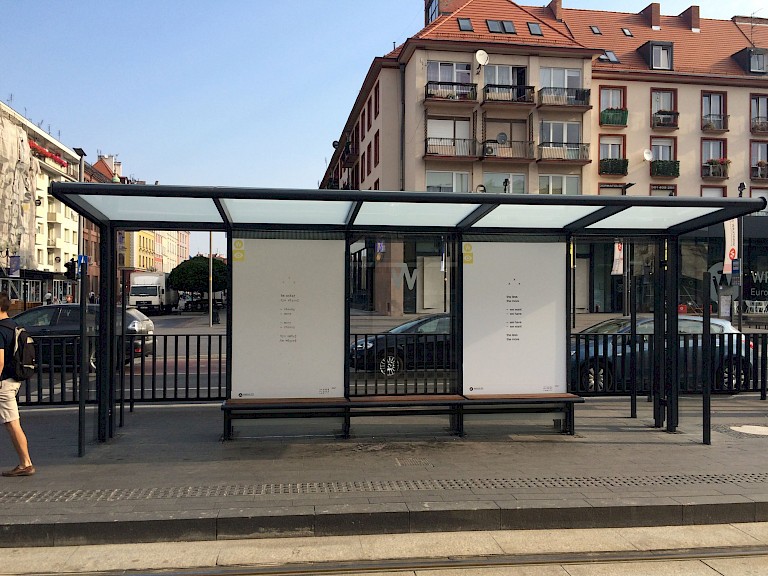 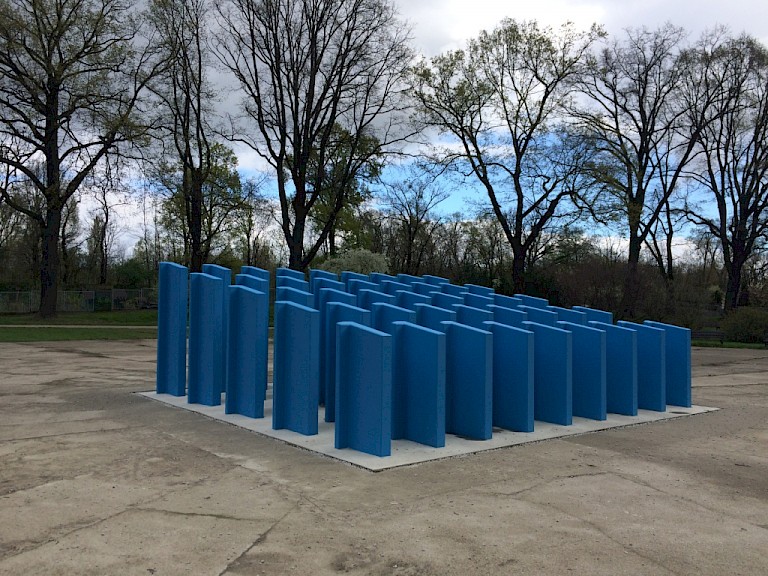 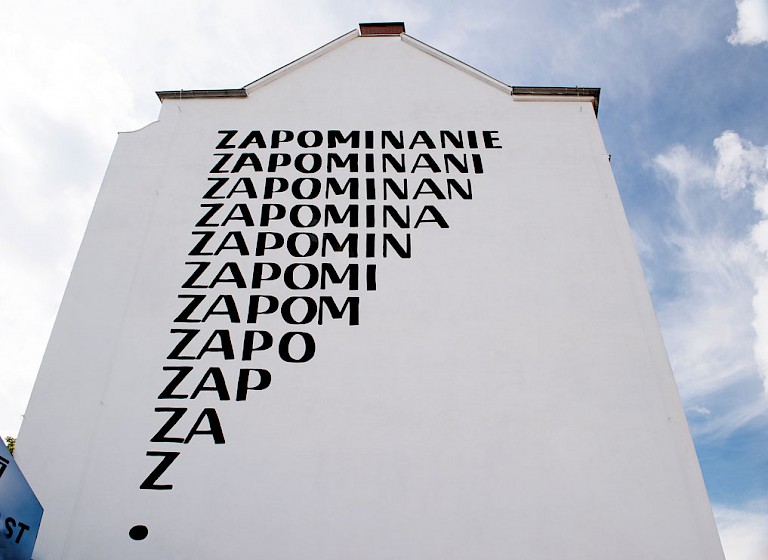 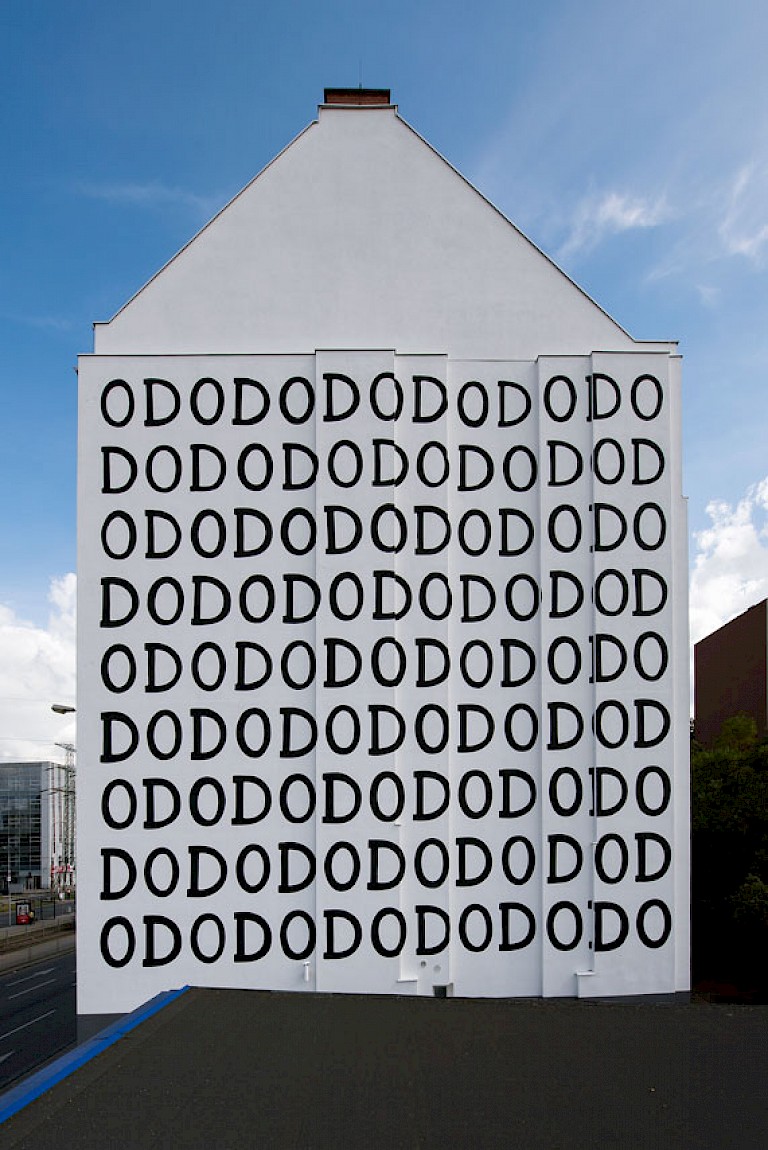