«The Crossing» was a temporary light-motion installation by HC Gilje that explored and re-activated an abandoned construction site near Zapolyarny, a small Russian town above the polar circle. As stated by the artist, the work, in which ephemeral light met physical structures, was the exploration of motion itself, the way it passed through spaces, objects, bodies, and landscapes. The installation consisted of a frame of cables on top of the structure and produced an effect of glowing spots, or short lines of white light, moving at different speed through different trajectories: «pulses of light passing over an unfinished structure of concrete slabs sticking up from a frozen dam. A total of six lines of light were suspended over the 20x20 m area in the industrial zone of Zapolyarny.»

HC Gilje described his own project as being partly inspired by a quote from the essay «Motor Geometry» by the Dutch architect Lars Spuybroek: «We no longer look at objects, whether static or moving, but at movement as it passes through the object.» «The Crossing» acted as a subtle interference that caused a shift in the perception of the site, and linked it to a broader and deeper realm of the Northern environment. It also merged the line between the work and the viewer, as audience could enter the construction site and move around it, following and traversing the moving light network. Zapolyarny is a community that and metallurgy. Located 103 km to the north-west from Murmansk, the administrative centre of Murmansk oblast and the last city to be founded in the Russian Empire in 1919, Zapolyarny is also very close to the Norwegian border. Its residents often travel to Kirkenes (only 65 km away from it) and are allowed to get long-term Norwegian visas. Murmansk region features a subarctic climate mildened by the Barents Sea, with long cold winters and short cool summers, the polar night and the polar day. It is important to understand that with his artwork HC Gilje did not intend to address or analyze the particular local context of Zapolyarny, but rather reached for the contact with the realm of natural frequencies and forces, drawing a connecting line through human-made surfaces and slow, long-lasting movements of the Earth magnitude, as well as infinitesimal, all-permeating, and barely tangible movements of traveling energies in the electromagnetic spectrum. The work did not seek to engage with the community directly, but it was, however, making a meaningful use of a very specific site in Zapolyarny that reflected the industrial origins of the town, the nondurability of industrial projects, and the traces they left that kept slowly integrating into the natural environment.

«The Crossing» was an intentionally ephemeral public artwork, it could only be viewed for one hour, from 19:30 to 20:30 on a Sunday in late November, 2015, with two buses organized specially for the viewers from Zapolyarny and Nikel to get to the place where HC Gilje had installed his piece. «The Crossing» was made as a commission for the second Dark Ecology Journey, a project that began in Kirkenes in Norway’s northern extremes and traveled via Nikel and Zapolyarny to Murmansk, the largest Russian city above the polar circle. Dark Ecology was a three-year art, research, and commissioning project, initiated by the Dutch Sonic Acts and Kirkenes-based curator Hilde Methi, in collaboration with Norwegian, Russian and other European partners. It unfolded through research, the creation of new artworks, and a public programme that was presented in the zone on both sides of the border in 2014, 2015, and 2016. As the programme introduction states, «Dark Ecology is informed by the idea that ecology is ‘dark’ (as the American theorist Timothy Morton has argued), because it invites – or demands – that we think about our intimate interconnections with, for instance, iron ore, snowflakes, plankton, or radiation… Ecology does not privilege the human, it is not something beautiful, and it has no real use for the old concept of Nature.

What we now know about the impact of human beings on the planet has led to the need to rethink the concepts of nature and ecology, and exactly how humans are connected to the world. This rethinking occurs in philosophy as well as in the arts. Though these issues are relevant anywhere in the world, they are especially pertinent in the Barents Region with its pristine nature, industrial pollution and open-pit mining. Speculation on global warming fuels local economic growth, as the prospects for both the exploitation of the oil and gas reserves below the Barents Sea and the trade through the Northern Sea route are rising. Disparate interests and ‘approaches’ from both sides of the border have to negotiate. This interaction informs the Dark Ecology project, and is a starting point to invite artists and theorists to develop new approaches and new works.»

The outstanding quality of «The Crossing» springs from its minimalist form and meaningful poetic engagement with the challenging location. All of this produced a laconic and accessible temporary environment, blending the industrial object with the natural environment of the Extreme North. The aesthetics applied by HC Gilje could be appreciated by audiences of all ages and backgrounds. Within the programme of Dark Ecology, he presented another work in the public space of Nikel, not far from Zapolyarny, — it was based on his film titled «Barents (Mare Incognitum)». HC Gilje generally works with real-time environments, installations, live performance, set design, and experimental video. The artist’s main interest lies within the perspectives on how different media resonate within a space, both physically and mentally. Gilje has presented his work via different channels throughout the world: in concert venues, theatres and cinemas, galleries, festivals, outdoors and through several international DVD releases . 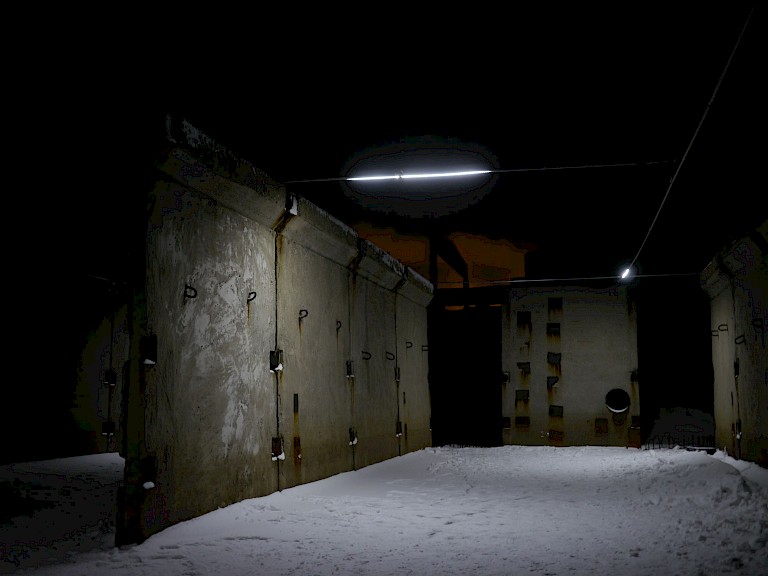 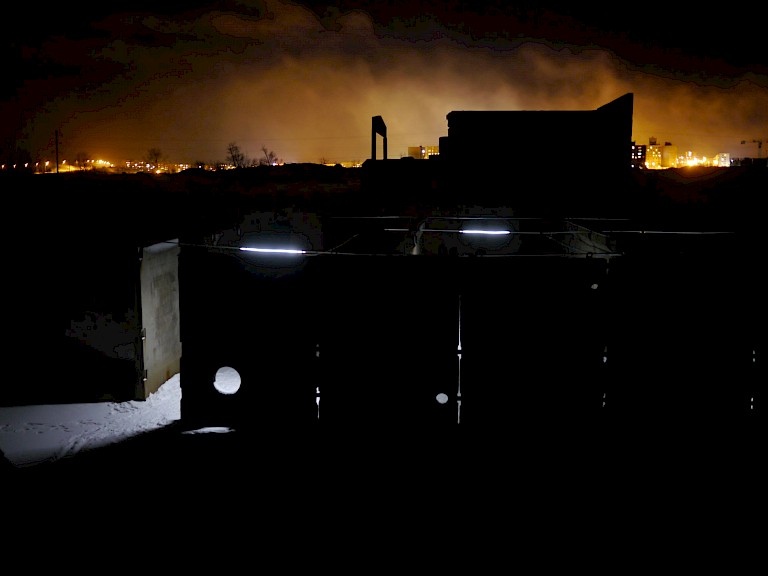 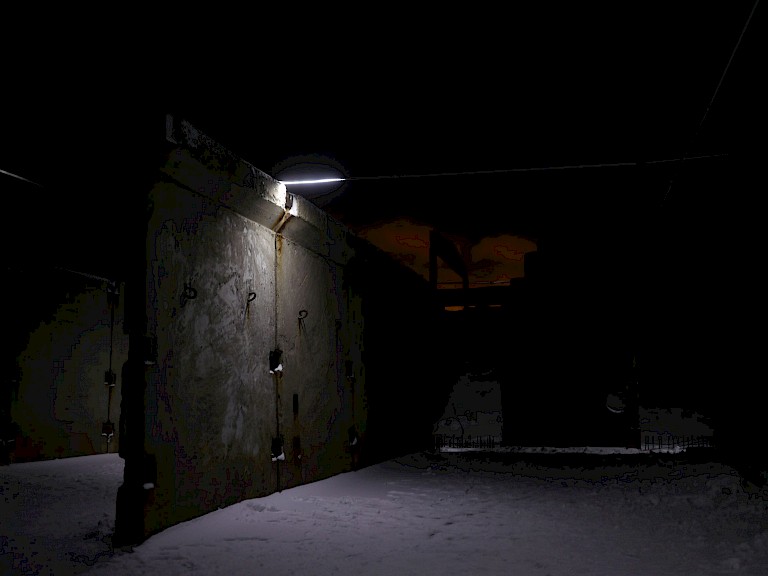 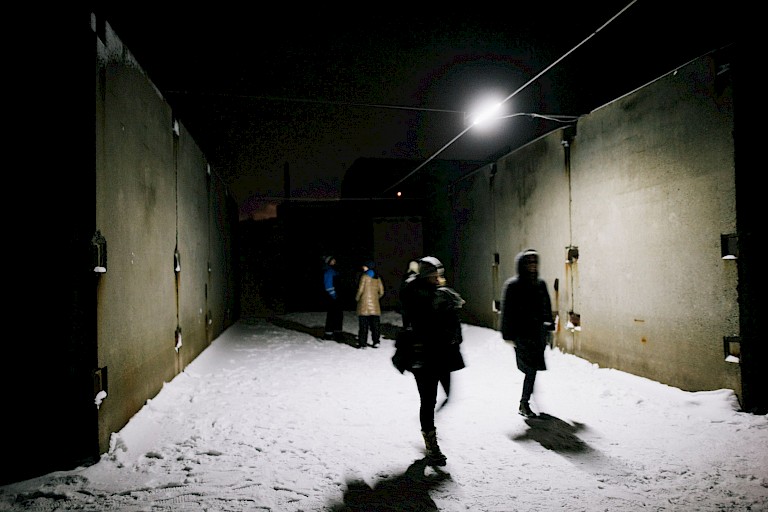