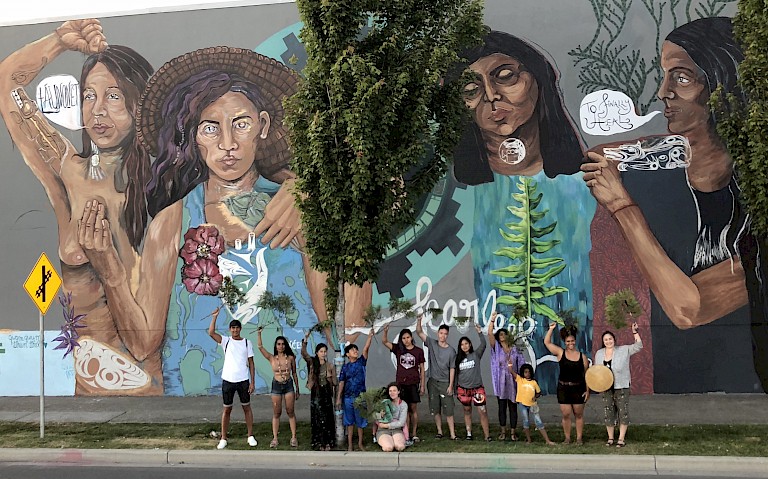 Fearless is a South Asia based public arts project that creates space to move from fear to love using participative public art. In 2012, Bangalore-based visual artist Shilo Shiv Suleman started Fearless in response to the powerful protests that shook the country in response to the “Nirbhaya” tragedy in Delhi, India. Since then, Fearless has worked in over 12 countries, co-creating more than 40 murals which depict women and their significance in societies around the world, as a reclamation of spaces as the safe and sacred spaces they can and should be.

They have worked in India, Pakistan, Nepal, Brazil, South Africa, Indonesia, Tunisia, Lebanon, Canada, the United States and more. They have worked with a range of diverse communities- from Syrian and Palestinian refugees, to Transgender Sexworkers in Rawalpindi, Indigenous communities of the Tupinamba and Coast Salish Nations. They have created some of the first representations in public spaces of queer communities, reaffirming that Fearless’ work is to show up in spaces of fear, isolation, and trauma and support communities as they reclaim their public spaces with the images and affirmations they choose.

Through the years of Fearless’ growth the vision remains: to replace Fear with Love, to call people in, rather than call people out, to reclaim public spaces, and to ultimately form a movement of women across South Asia taking back their streets from Fear.

Fearless is a movement in the making- they aspire to lead/ become hundreds of South Asian women and artists in the streets, paint brushes in hand, facilitating critical social justice conversations with communities, creating public art and reclaiming public space.

Every part of the fearless project is developed in relationship with local NGOs and communities that are rooted in and responsive to local contexts, starting from the conception of the project all the way up to choosing the wall and choosing why they are painting something in a specific space, to deciding what they paint on the wall. They use a six step fearless methodology, developed by Shilo over the period of 2012 - 2015, which guides communities through an immersive process of self representation and collective self healing. They use ritual as well as photography techniques to enable community members to choose how they want to be represented on the walls in their spaces. The spaces that they choose with them are either spaces of reclamation- spaces that once used to belong to that community, but now they don't have access to- or spaces of occupation.

The Fearless methodology emerged through interactive workshops, led by Shilo, with different communities – from the Koliwada fisherwomen in Bombay to the transgender community in Rawalpindi. The methodology brings together symbol, ritual, and storytelling in a powerful and intimate act of feminist solidarity and care. The methodology draws from personal history, traditional storytelling techniques, and universal myths and archetypes. 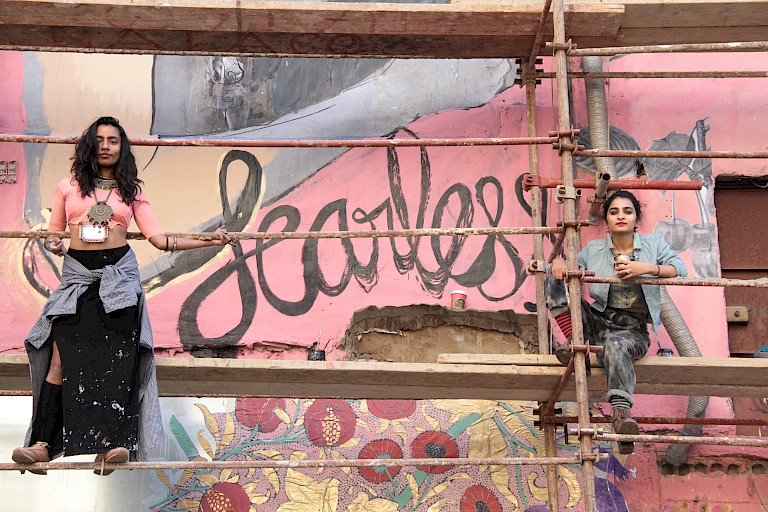 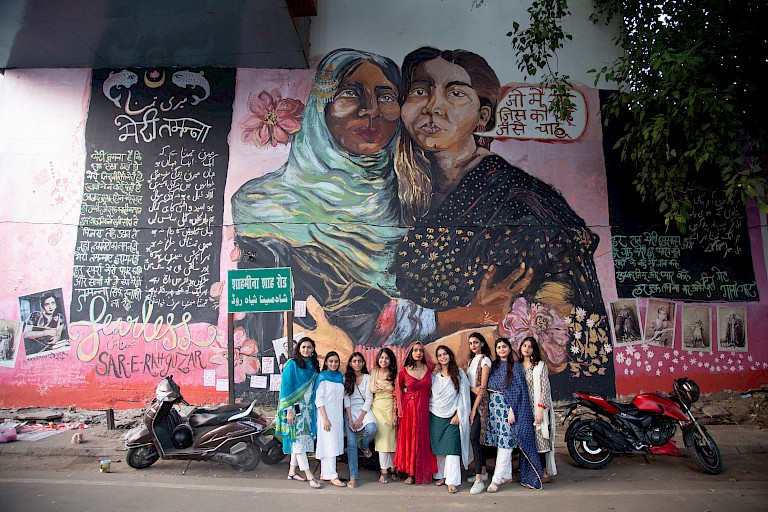 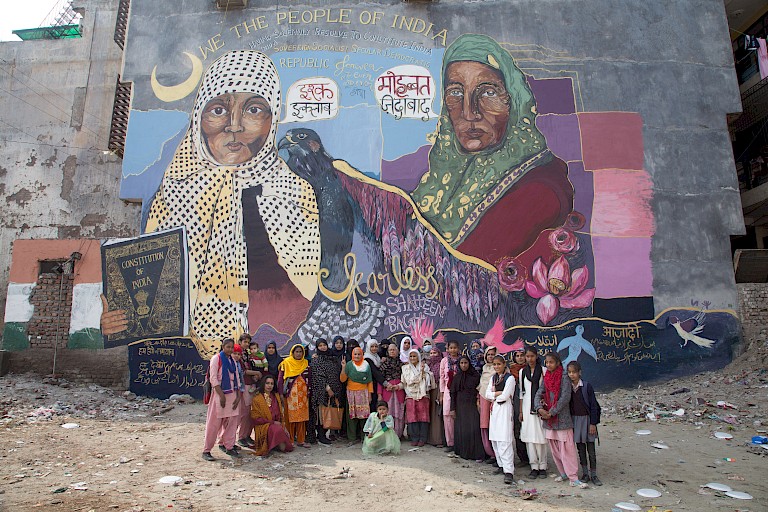 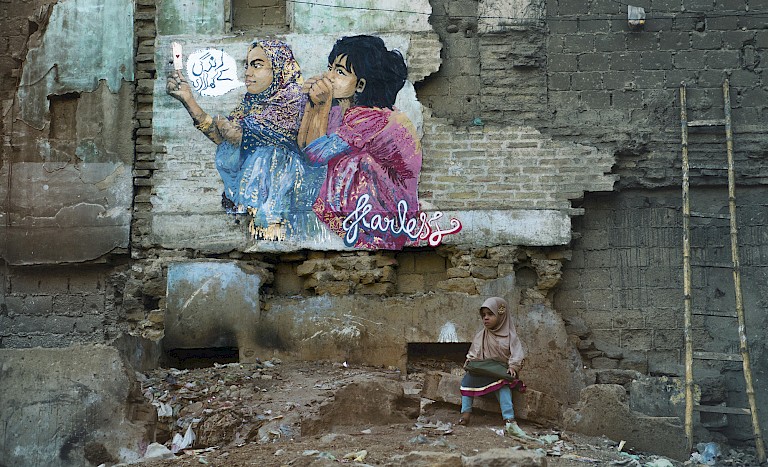 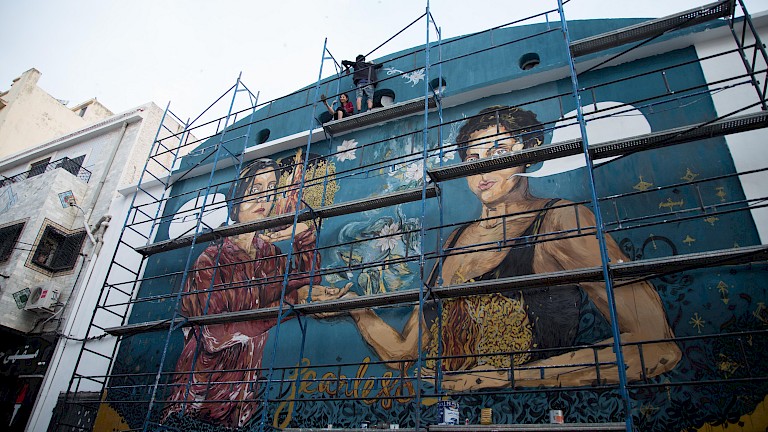 Fearless work is at the nexus of personal healing, social dialogue and political public placemaking.
They measure the power of their work on three levels: The Personal- how individuals are healed and overcome fears.

The Social- how communities have engaged in dialogue and transformed (A transgender sexworker in Pakistan was invited into the home of her neighbour to drink tea for the first time in 14 years).

The Systemic- how policies, public spaces or norms were shifted by the work.
The Collective believes that a mural is not just an image that appears, but the manifestation of a process of self-representation that emerges from speaking with the community, engaging with different organizations on the street, having conflicts mitigated with everything from policemen to drunken men and mafia, to death threats. In the process of negotiating and confronting all of the fears that come up, they end up creating space in which people fear-less and find more room for love. Fearless makes sure that they look at the spaces they work in as safe spaces that the communities can engage with.

The dream of Fearless is to grow beyond an art project into a movement. In terms of outreach and educational programs, they are currently training dozens of artists across South Asia in their methodology so that they can create Fearless interventions in their own streets and form local fearless collectives to work with different communities who are on the margins and made invisible.

Because this is a participatory methodology, it is really one of its kind. Usually, artists will go to different spaces and paint people for them. But Fearless’ process calls for people to represent themselves. It's a form of self representation for different communities. It is not only visual arts, it is also in part a form of art therapy because they facilitate a lot of trauma based work in their workshops. It also ends up being kind of performance art and public reclamation as well as placemaking work. The monuments that they create live for a lifetime.

“In the process of changing visions of what is possible and reclaiming who gets represented and how- realities change. Once we begin to shift our imagination, reality shifts with it.”-Shilo Shiv Suleman

How the audience responds to these projects is crucial because the work Fearless does is not guerilla artwork. They work in spaces for 7 to 10 days, occupying spaces, sitting on the streets, sitting on the pavements with queer men, with the transgender communities, with groups of young women, with communities that are really not visible and not given access to public spaces in the same way that men in South Asia are.

Participation and self representation are really important for the Collective because mostly the people who are sharing their stories are often spoken for and to, but rarely are their stories told by them. So this becomes a way for people to use storytelling, not only as a way of reporting their issues, but also healing their trauma, representing their bodies, and claiming a safe and secure future that they don't have access to.

In the process of occupying and creating these spaces, the Collective engages with all kinds of audience. Sometimes they also have the same people engaging in heavy discussions about what it is that they're painting. There are infinite conversations that come up as a result of what is allowed and what shouldn't be allowed. Conversations are at the core of Fearless Collective’s work because it is through discussions and dialogue like these that they try to make space for a kind of civic engagement that allows for imaginations and realities to shift.