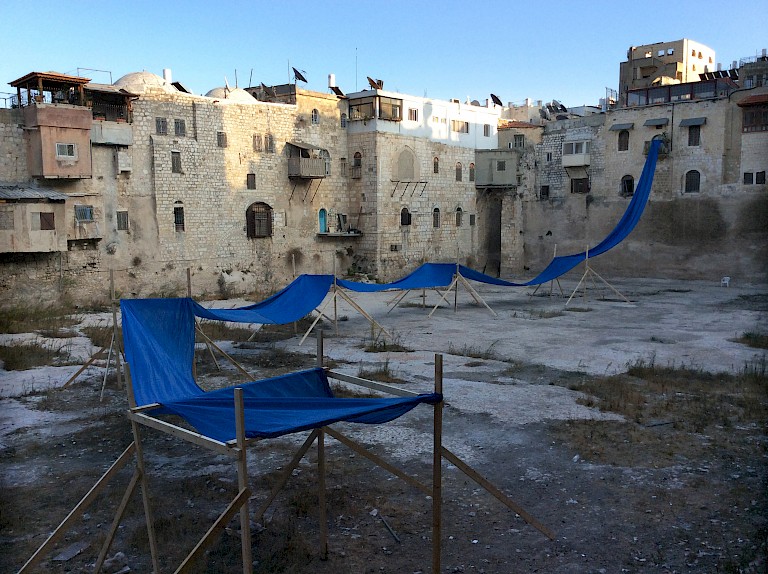 The Recovery of an Early Water

Turkish artist Hera Büyüktaşçıyan’s work, The Recovery of an Early Water, retraced the route of Hezekiah’s Pool—an ancient water well that dates back to the 8th-century BCE—located on a property owned by the Greek Orthodox Patriarchate. In Büyüktaşçıyan’s work, a synthetic blue sheet, draped over a makeshift balcony and supported by wooden girders installed on the ground, covered the empty lot—a visual reference to the once abundant resource for water. Over the past few decades, the ancient reservoir has become a trash receptacle for local residents. Just two weeks after the opening of “Fractures,” heavy rain and community opposition forced Büyüktaşçıyan’s installation indoors. Neighbors who had previously offered access to their homes behind Jaffa Gate to unravel the artist’s fabric suddenly refused entry: a testament to the atmosphere of bitter tension following recent clashes between Israeli settlers and soldiers and Palestinian youth at the nearby Al-Aqsa Mosque. Büyüktaşçıyan’s project examines the degradation of a lost lifeline, forcing us to remember Hezekiah’s Pool before it was a health hazard. 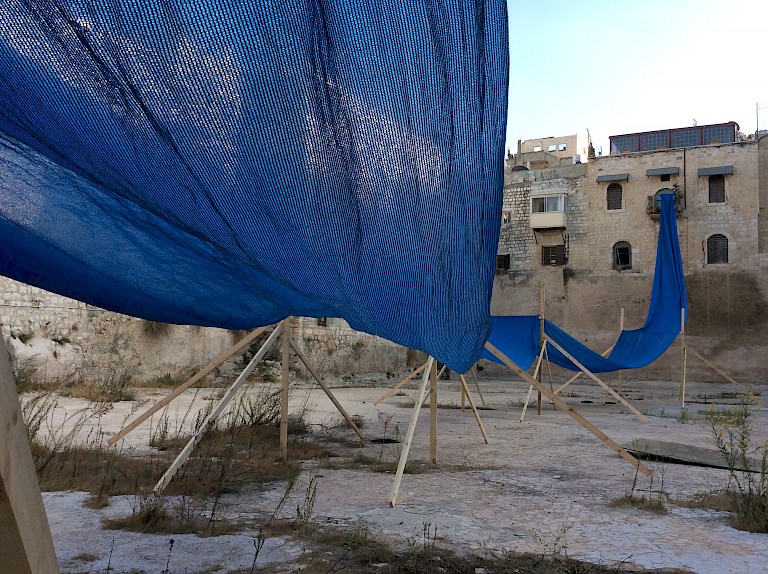 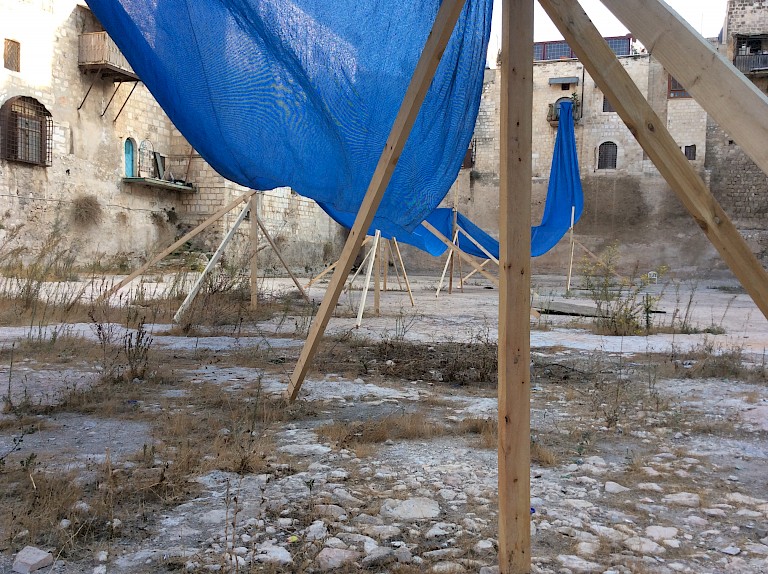 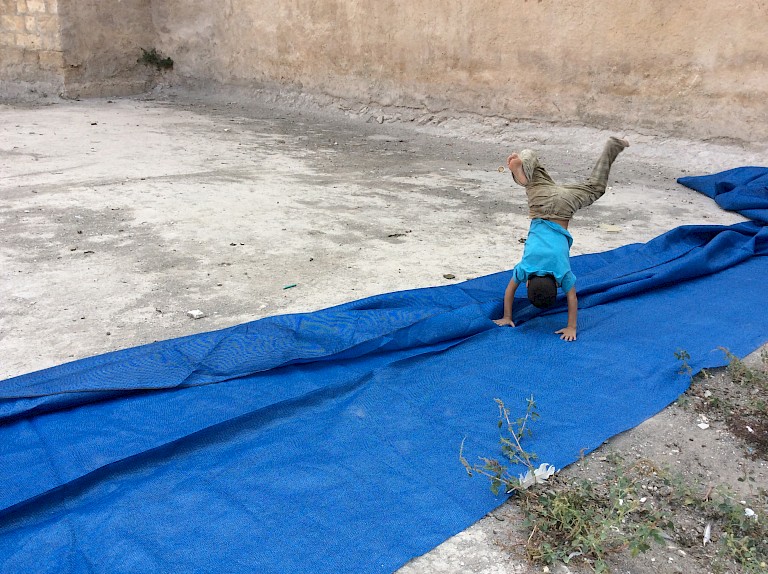 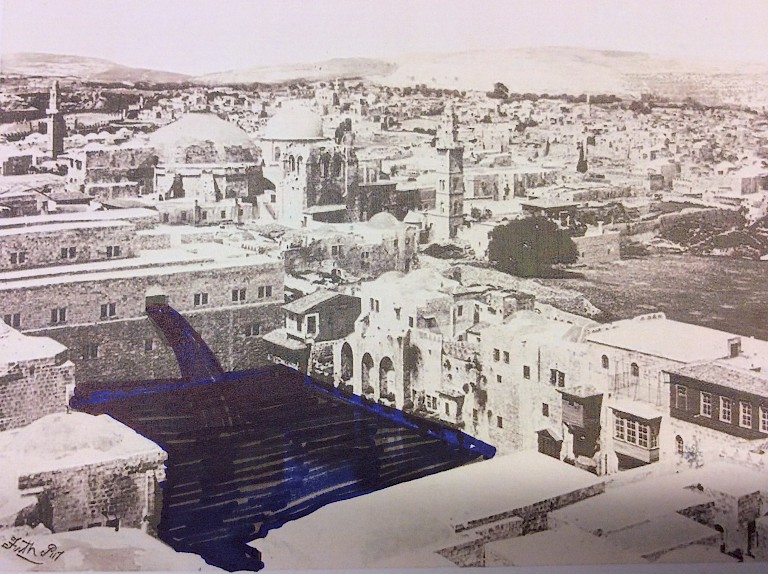 Hera’s initial intention whilst conceptualizing the project was mainly to reactivate a long forgotten water source, through a gestural act/piece that would bring invisible layers to the surface, enable the hidden to remind itself through an unexpected movement and anchor the past to the present. Beyond being a nurturing source, water as a geo- political element that connects and divides geographies and societies throughout history, also has an important resonance within the movements of people and land politics throughout the history of Jerusalem. It has been an important aspect that has been very present yet hidden throughout it’s past up till today.

The piece in this sense gives a possibility to not only mobilize a static space that has remained invisible through a virtual water path, but mostly to allow one to emphasize the notion of connectivity, repetition of history, the fluidity of social structures and the uncannyness of the ground one stands upon, by witnessing a site that still breathes and bears the recollected traces of it’s past and present.

By reviving the memory of the water with an architectural intervention, The Recovery of an Early Water might therefore be understood as a way of commemorating the social, political and historical memory of the city. The invisible aspect of water is turned into a virtual reality by allowing it to flow from the windows as if history were flowing out from the place it had been hidden. The Patriarch’s Pool (also known as Hezekiah’s Pool) situated within the Christian quarter of the Historic center of Jerusalem, is an ancient water reservoir built by King Hezekiah on the 8th century BCE, who has built several other water supplies within the city. It was supplying water for the daily use for the residents living nearby, that received it’s water from the ancient Gihon spring. Following it’s construction, due to outbreak of the war with Assyrians, the king directed the water spring towards an underground tunnel, so that his enemies could not access water and get defeated. This act of hiding the water and keeping it for only his people, caused all the water architecture that he himself had built to get dried up within years, up till today. This story says a lot about the cyclical terms of the site as history repeats itself all the time. Currently the site remains closed as being in fragile status due to the land politics of the Israeli – Palestinian conflict.

With the permission of the neighbours and the efforts of the organization, the project could be realized on site and through it’s production phase the accessibility of the site also allowed Hera to be able to have a connection to the local community who has warmly responded to the work. Through this Hera also had the opportunity to witness their encounter with the site, that has been valuable for her to understand the importance of public sphere as a base for community building as well as reconstructing connections that has been completely lost specially within a fragile and intense situation.

Due to the Gaza War in 2014, the project could not remain open for long. Yet while it was accessible, the piece operated mostly as an anchor that linked the locals to this site that was both silent and unreachable for a very long time. In this sense, the piece is a gesture that actually activated this invisible organism, through a virtual water path that flew within the space... as a water source that was once hidden and now flows backwards and enabled it’s real residents to co exist within it. Such works in public space, specifically in such contested sites become like mediators or instruments that activate certain histories and narratives that are unspoken or invisible. 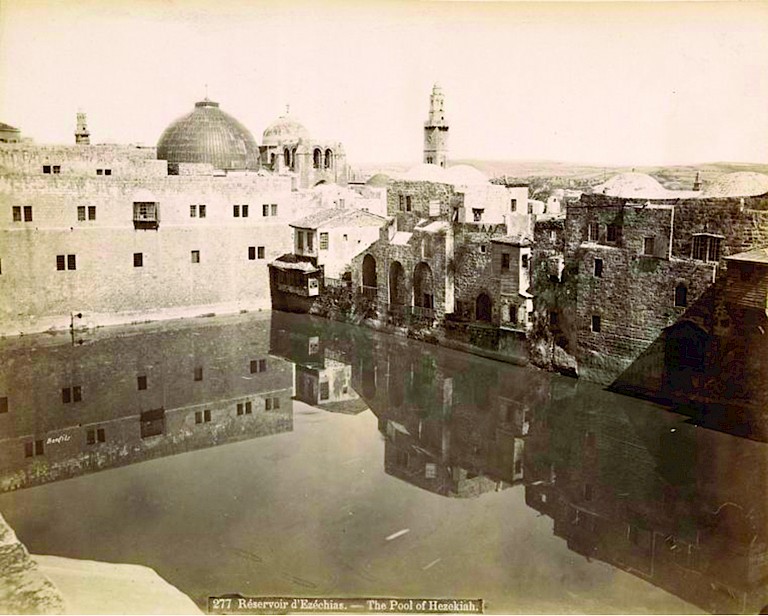