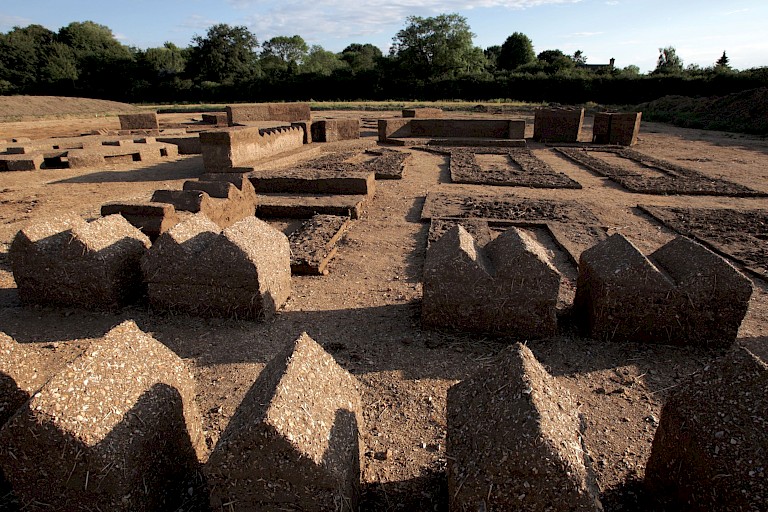 The University of Cambridge is one of the world’s leading universities and in 2013 the estimated increase of student numbers was of around 5,000 over the next 25 years, and staff numbersby approximately 3,000 people. To maintain its reputation, to compete with other world-class universities and to take full advantage of the link connecting business and academic interests, it needed to address the scarcity and expense of housing for their staff and students in the growing city of Cambridge. Therefore, the North West Development project began, for building a new district and an extension of the city.

The planning, formalised in February 2013, included a Public Art Strategy in the frame of the Community program, including farming activities, archaeological research, an artist residency program and artwork commissions, involving artists since the beginning of the North West Development, thus considering public art as inner part of the process of space transformation and not just a tool for illustrating it.

Among the objectives of the Public Art Strategy was the understanding of place in relation to its ancient and recent history, and in relation to empty and inhabited space; the developing of the plan in relation to the qualities of Cambridge's urban and rural environment; the improvement of the engagement of local communities.

Between 2012 and 2013 the farming terminated and archaeological activities on site started bringing up Bronze Age and Roman era domestic and farm-related artefacts, which were catalogued by the Cambridge Archaeological Unit. At the same time, the North West Cambridge Development Public Art Programme (NWC) published the open call for residency won by Somewhere, a multi-disciplinary, non-profit creative organisation run by artist and film-makers Nina Pope and Karen Guthrie.

At the end of the residency program, they produced Tomorrow, Today, a landscape intervention installed in 2014, between the 28th of April and the 6th of June.

Specifically, it was an installation of 60 meters wide, 80 meters long and 1.5 meters high, which was born on a 3D scale cob model of a future building development, sited in the middle of the archaeological dig preceding the construction on site.

After the research phase, taking part in an archaeological dig on site in midwinter 2012, the artists participated in academic learning weeks in situ, led by expert builder Kate Edwards, a researcher of earth architecture, as a foundation for developing the concept of the art project. For the development of the project, Karen Guthrie & Nina Pope recruited COB tuition expert and project coordinator Kirsten Lavers, who defined a project methodology involving 60 volunteers for 6 weeks on site and built the handmade space of the installation in collaboration with one machine operator.

The NWC site was previously a farmland operated by Cambridge University, which exceptionally was permitted by the UK government to change its use to residential, across over a decade of development planning. The NWC site lies near the main arterial routes, which are close to several historic University Colleges and Campuses.

As the artists explain, they were struck by the rapid and total transformation of the land from a potato field to a streetscape within a period of 18 month, a rate of change which was previously alien to the history of a city such as Cambridge, albeit common in other parts of the world.

This sense of disorientation fed into the concept for Tomorrow, Today, which addressed the difficulty of imagining a future community and its environment as well as forging a material and spatial link to the long vanished prehistoric occupants of the land on which NWC would be built.

The piece sits on a flat plain of subsoil on the edge of the growing NWC Development, like a prehistoric monument, without a fence or an information sign. The aerial imagery shows the close relationship of the archaeological pits and spoil heaps to the installation’s earth forms, which is adjacent.

Tomorrow, Today has been conceived as a temporary installation, but in 2018, after 4 years, the piece has not yet been buried under the encroaching development, although this was the plan. It is decaying, growing wild plants and taking on the character of a ruin, a mysterious relic that might be 5,100 or 1000 years old, used by locals often for walking their dogs. The paradoxical question that the artists posed and purposely left open through their work, as the title “Tomorrow, Today” reveals, is about the future of an artwork born by a digital printing recalling ''the ancient'' which emerged by archaeological excavation. It encourages reflections about the contemporary nature of the new urban development and the unique archaeological access to the past of the area, and about the future technological spatial, social and cultural configuration of human communities.

The work welcomed about 800 people during its opening time. The installation is still frequently visited by builders and planners working on site, and the specialized magazine British Archaeology, precisely the issue published on March-April 2015, talked about the project.

The relevance of the project lies in the development of a site-specific artwork derived from the artists' experience of ''deep time'' archaeology. Sixty people composing a heterogeneous public spending five days on site, has been actively engaged in the building of the space by learning how to work with cob, gaining social and professional contacts and having a very positive experience of cultural participation (responding also to detailed evaluations by the artists).

Professionals, such as architects and builders appreciated the project, they used the installation as a communication tool for testing and understanding the future of the site.

Moreover, the installation is highly ecologically sustainable: on the one hand, artists used hand-built 'cob', a traditional natural building material made from subsoil, water and fibrous organic material, in this case made primarily from the earth excavated in situ by the archaeologists; on the other hand, the installation had a slim environmental footprint, being made from low carbon materials found on site, that can be simply buried under the future development without any need to demolish or extract them, as the artists explain.

Finally, the project was also economically sustainable, because it was delivered on an exceptionally small budget comparing to its ambition, with a volunteer-based workforce, and on the hands-on participation of the artists throughout the building time. 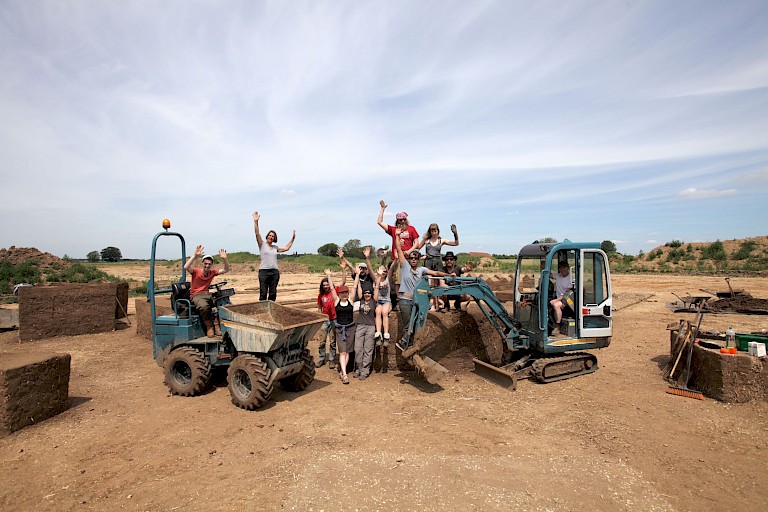 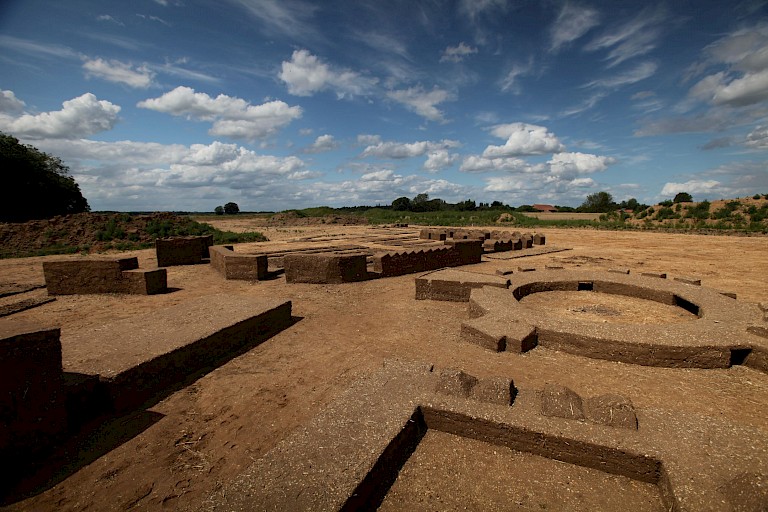 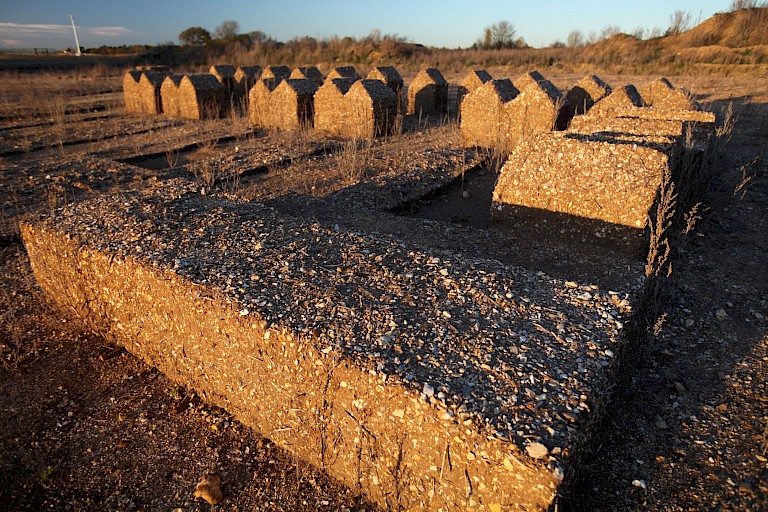 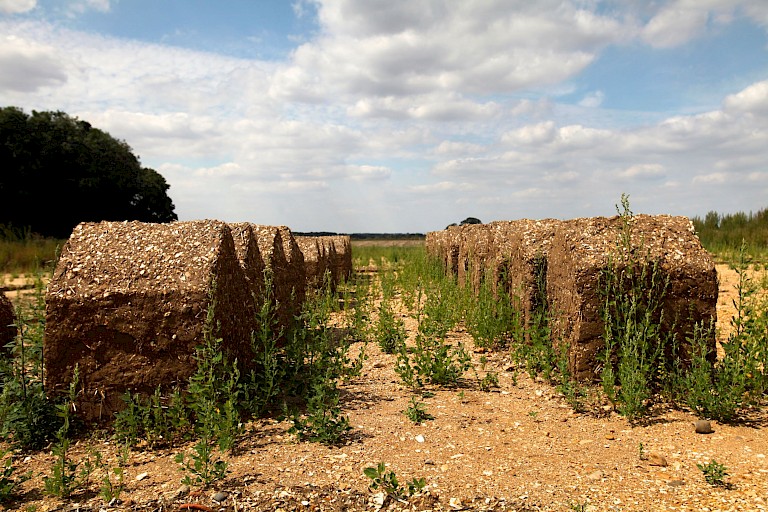 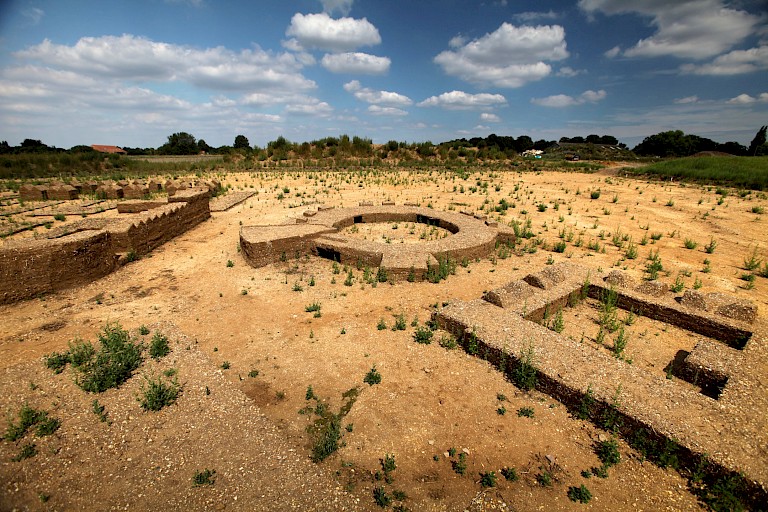