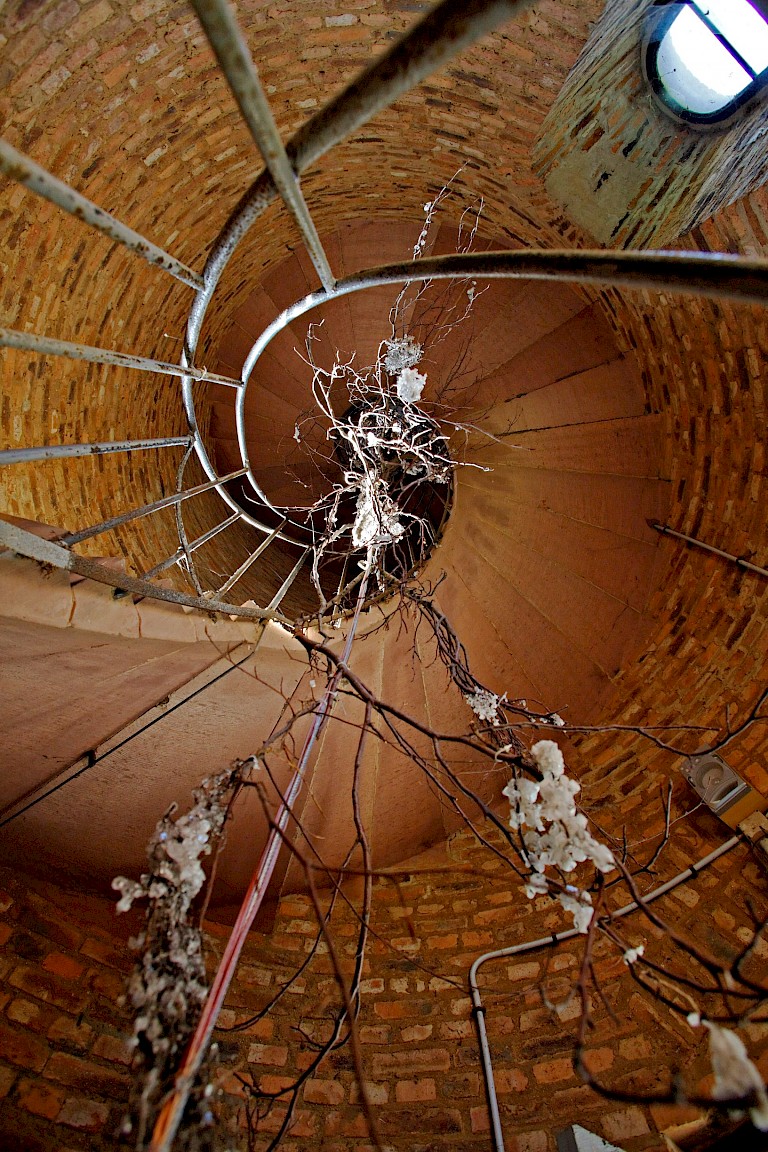 Tower of Immersion, by Helga Griffiths is an installation commissioned and produced in the frame of the 6th Internationale Waldkunstpfad (International Art in the Forest), organized by a private society with support of the GEOPARK Odenforest – Bergstrassef, and presented to the public from the 11th of August to the 30th of September 2012.

The installation is a kind of artificial-biological three composed by branches, which have been immersed each day for several hours in chemicals to grow crystals, sound, cables and wires. It has been built using different materials like steel wire, fluorescent paint, ultraviolet lamps, steel gong, different musical instruments e.g. violin bows, drumsticks and audio equipment.

The objective of the artwork was to transform the function of the Ludwigshöhe-Tower, a tower well-known by citizens of Darmstadt as ''viewing tower'', into a space of observation and experimentation, as a place for public multisensorial experience and physical-metaphorical displacement of reality.

As the artist states, the attention was shifted from the outside view to an inner view of the body. The forest from the outside became a forest of cell-like forms, through an alchemical process that transformed the collected fine beech branches into a landscape of crystal-growth. According to climate and to time, the branches were immersed in the solution in night time, for producing unique jewel-like objects that were installed during the day. Visitors could immerse themselves into this experience and listen to a sound collage of dream fragments, describing surreal voices of landscapes for loosing themselves into the emotions they evoked. Additionally, new forest of ideas grew from the collected broken branches that were found along the forest art path.

The effects provoked by Tower of Immersion, encouraged visitors to concentrate on their perception of the natural landscape, but also on the imaginary produced by their own subconscious and dreams. After experiencing the surreal forest inside, the perception of the landscape outside was enriched by multiple senses who changed the perception of reality. The installation not only challenged the visitors’ perception of their own environment, but also, as artist explains, their speed of walking through the forest, because it can change what we perceive, what and how we touch, smell, see and taste, it can change even our equilibrium. Some visitors were so intrigued about the Tower of Immersion that wanted to start on their own keeping a dream diary. That's the result of a deep research made by the artist during the process of development of the project idea with Professor Tamara Fischmann, dream specialist of the Freud Institute Frankfurt.

Helga Griffiths was invited to work on the forest as nature by director of International Forest Art Center Ute Ritschel, precisely on the theme of ''Reality and Romantic''. According to the artist, the initial idea for the art intervention on the Ludwigshöh-Tower was to relate the tower and the forest to the human perception and dreams, by recreating the image of the dream-like underwater landscape, which had references to nerve cells in the whole interior space. At the beginning, she developed the project turning the light into blue, understood as one of the two pure colours, the colour of the weakened obscurity according to the Goethe colours' theory.

Before installing the work, the artist tested the human brain perception of landscape, by making a video of a flight over the glacial landscape of her own brain using Brainscape tool. Then she collected the branches that had a similar shape to nerve cells and suspended them from the top of the tower, following the spiral shape of the stairway.

The theme of the International Forest Art Project, 'Romantic and Reality', was interpreted in this installation using dream memories with a reference to landscape, selected from the artist's own and others’ dream archives. Finally, they were juxtaposed with hidden places and spread in the real forest. Spoken dreams were retold through underwater loudspeakers at the Goethe-Pond, recorded with a hydrophone and replayed using reprocessed sound in the Ludwigshöhe-Tower.

Visitors were able to listen to fragments of dream memories and the sound of disintegrating crystals, while climbing the spiral staircase of the tower, reconstructing them into images in their own mind.

According to Helga Griffiths, the viewers were intrigued by the experience out of the ordinary, by the visual aspects, the light, the sound, the scent and the physical aspect of walking through the exhibition - ascending into another form consciousness, connecting the lowest to the highest point of the tower and the forest.

As artist specifies, from a physiological point of view the dream process is still full of mystery, but it seems to play an important biological function in sorting new experiences and weaving them into memories.

The process recreated by the artwork in the Ludwigshöhe tower was about new connections (synapses) created between the nerve cells and experiences from the short-term memories, which were transferred into long-term memory and put into relation with existing memories, dissolving the borders between inside and outside, above and below, visible and invisible, audible and inaudible.

The analogies between the crystals grown specifically for the installation and the brain's nerve cells are drawn by the process of formation of memory, that’s why the real space is transformed into a psychological space, and the roots of three that were suspended within the spiral staircase lead to abstract forms of a brain at the top of the tower.

Images courtesy of the artist. 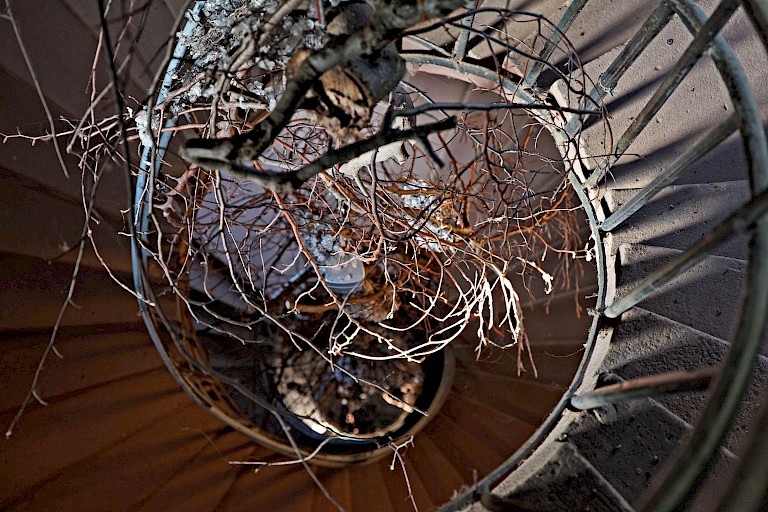 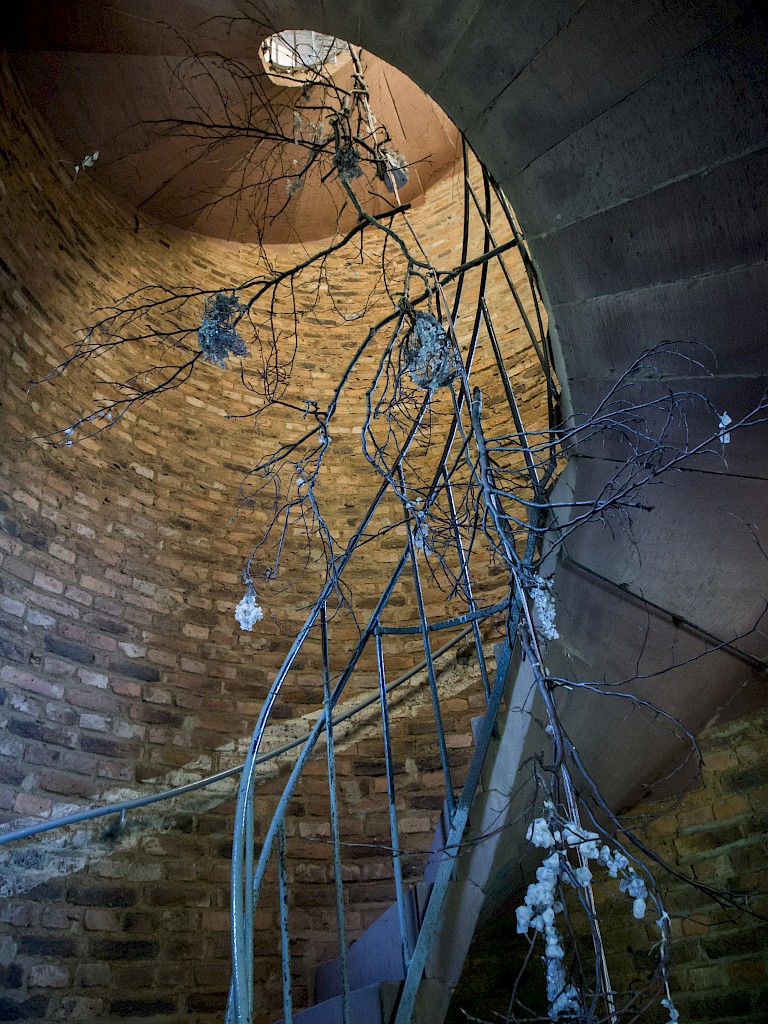 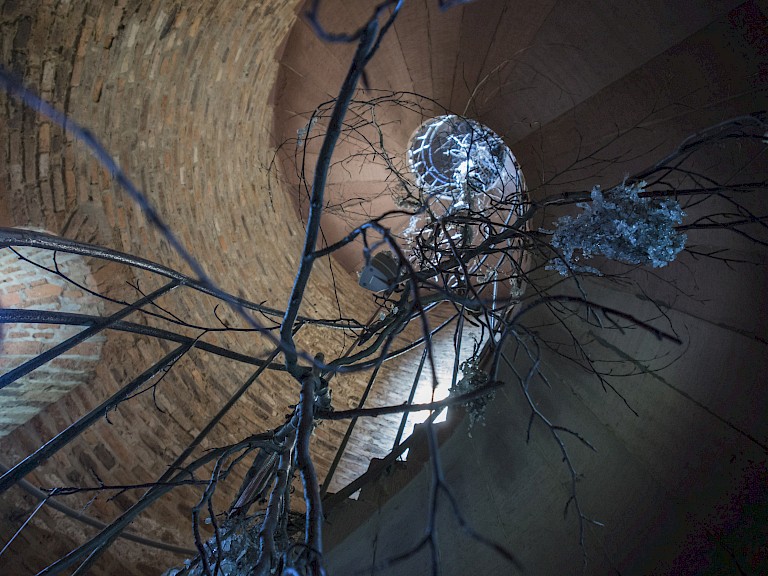