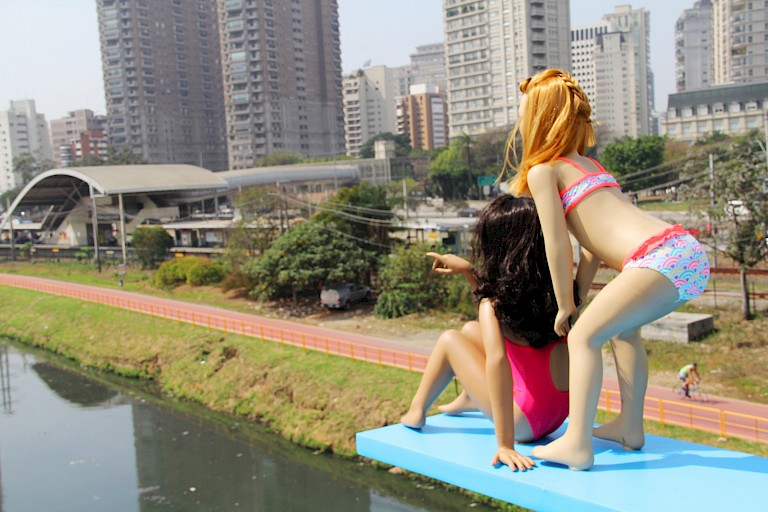 Renowned for his provocative works in the city of São Paulo, the artist Eduardo Srur created an urban intervention that not only alerted for a subject of relevance, but also brought unusual situations to those who saw the installations located on bridges crossing the Pinheiros River - one of the main rivers of the city and that for decades has been facing a serious problems with pollution, being the subject of projects attempting to clean it since 1998. Until the 19th century, many Paulistas (people who were born and lived in the city of São Paulo) used to fish, swim and practice rowing in the clean waters of the river. The transformation of this scenario began in the early 20th century with the accelerated growth of the city and the opening of lift stations for the generation of electric power for the Henry Borden Plant.

The Pinheiros River is also part of the landscape of the artist's studio, whose windows overlook the water. Constantly seeing these dirty waters in which you cannot swim, of a river that cannot be used is frustrating for Srur.

To bring this subject to the Trampolim (“trampoline”) intervention, Srur made realistic sculptures with characters referring to different ages (from children to older characters) in bathing suits, and positioned them on blue boards so that they appeared to be ready and willing to enter the contaminated water - as if it were something possible for them and referring to a time when it was possible to enjoy this river. The objective of the installation is to cause a sense of strangeness, almost like a surreal scene for that place, because it is in the subconscious of the population that the water is improper. This intervention brings this information about the quality of the water to the surface, at the same time that it generates concern when you come across a scene where someone about to throw him or herself in the river.

The reactions of the population were very diverse, and the Military Police was called and had to reassure and inform people that those were dummies. Drivers and pedestrians often stopped by the scene and called the Fire Department to file the occurrence. In addition to photos, selfies and testimonials in social networks, there were unexpected situations like paint being thrown on one of the characters, one of the sculptures being shot in the head and another being decapitated. The project incorporated these transformations that the artist believed to be interesting and pertinent to be seen, reflecting these events as a metaphor for the violence that exists in São Paulo and other urban centers.

Brazil has witnessed several environmental crimes in recent years, many of which remain unpunished until today. One of the most catastrophic was the rupture of the dam of a mining company that flooded the entire subdistrict of Bento Rodrigues, located in the city of Mariana. One of the consequences was the contamination of several rivers by heavy metals, causing a water crisis in some cities of the State of Minas Gerais, where the city of Mariana is located. Despite the catastrophe, government agencies have not acted properly in the case and little has been learned or thought out about this occurance.

The city of São Paulo has recently experienced a water crisis due to the low reserve in the dams, even thou the city is cut by two major rivers, Tietê and Pinheiros. Both of these rivers are extremely polluted and diseased and although they went through processes that tried to clean their waters, none of them were efficient, and the population often seems to forget the utility and benefit that these rivers would bring to the city if they were not contaminated.

An artistic work that deals with the awareness about the condition of the city’s water is fundamental and necessary. Since Srur is an artist known to deliver visual works that provokes its viewers in a direct way and with certain acidity, this was an interesting form of language created to make the population see the conditions of our waters and has brought a way for people to constantly remember that something must be done, micro actions must be taken, and macro actions must be charged. This theme has been pertinent in Srur's works, and “Trampolim” (Trampoline) gives continuity to this process. 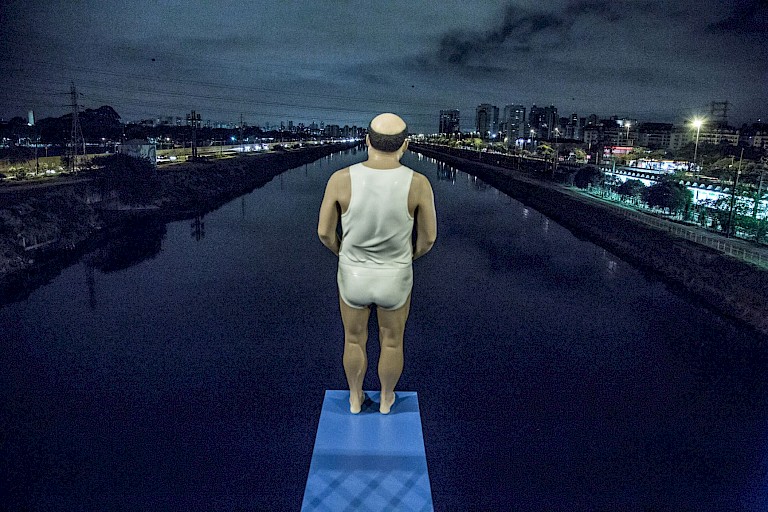 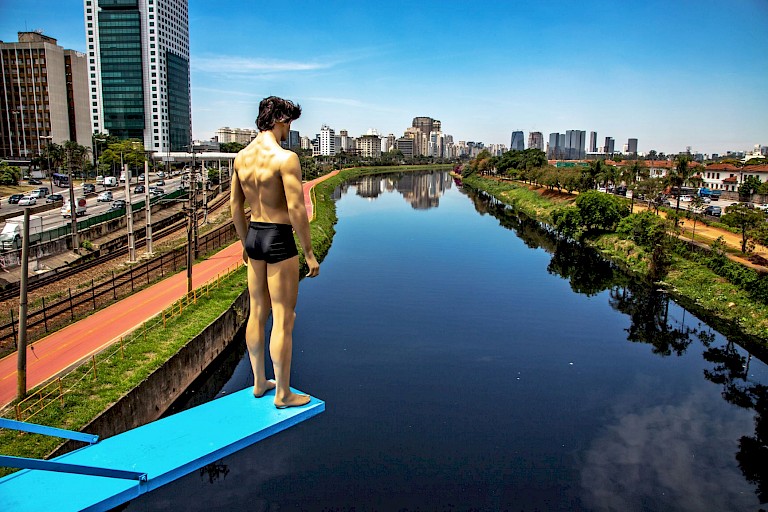 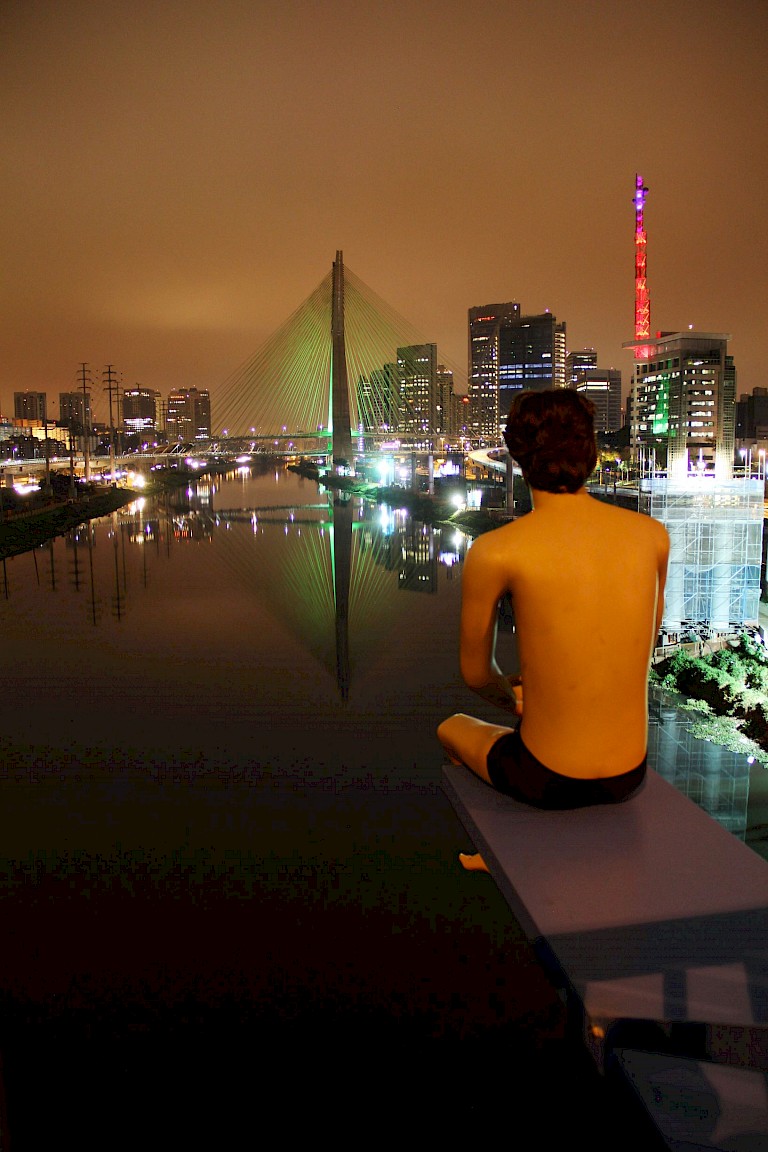 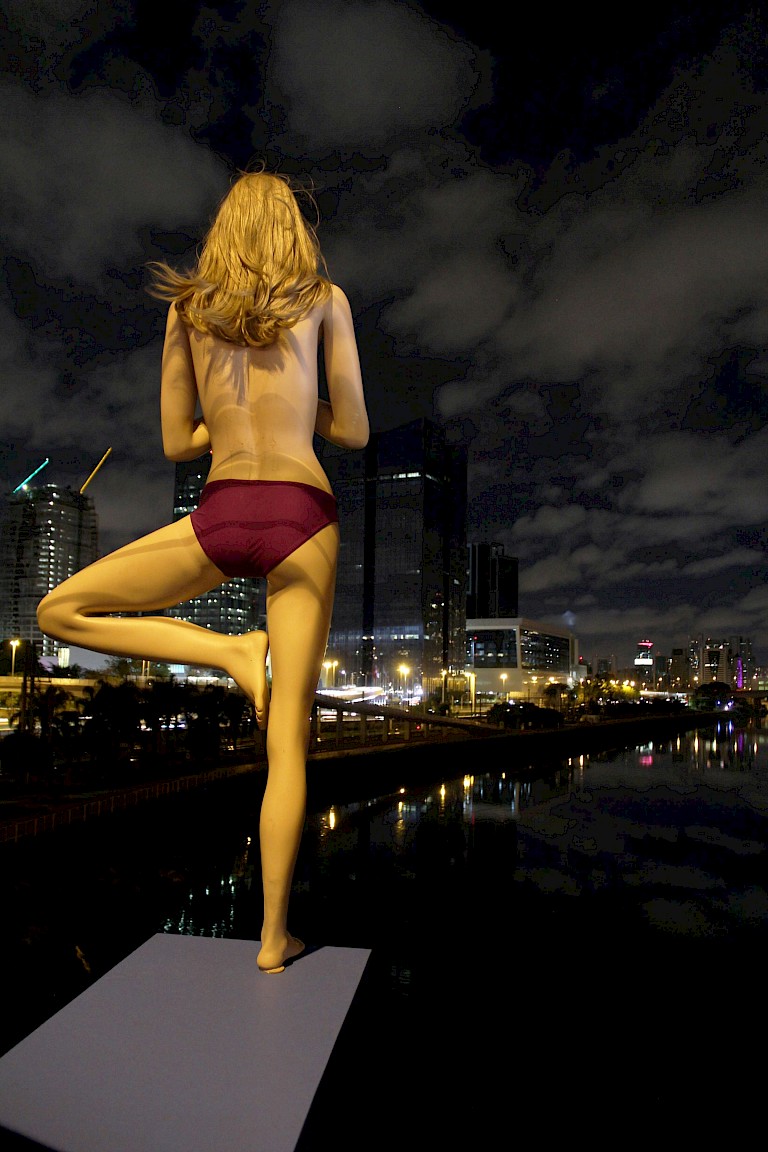