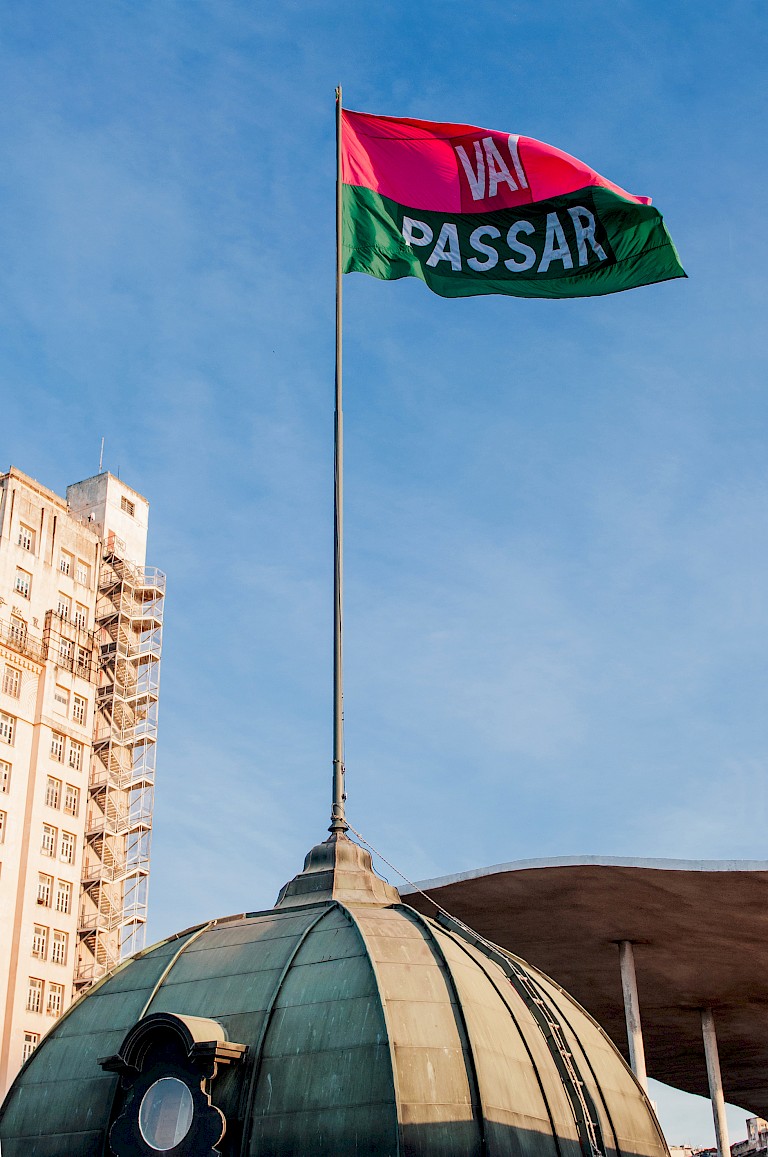 Vai Passar (?) is a monumental flag and public art intervention erected on the roof of Museu de Arte do Rio (MAR) museum, visible from the refurbished Olympic Boulevard and from the bay. Commissioned by the MAR in 2019 - three months after Brazilian President Jair Bolsonaro's conservative government began governing Brazil - the work is rooted in Brazilian popular music and subtly addresses the crisis and conservatism the country is going through.

The flag holds the words Vai Passar (This too shall pass? Will this pass?) a direct reference to a title of a Chico Buarque song composed in 1980 during the military dictatorship. Sewn on a green and pink shiny fabric, the flag refers to the colors of Brazil's first Samba School: Mangueira.

Marcos Chaves is not the first artist to establish a relationship with Mangueira. This social structure is collectively acclaimed for its contribution to the music and genre of Samba in Brazil but foremost for its political and social engagement through the lyrics of the songs they create and the gender/class composition of its members. 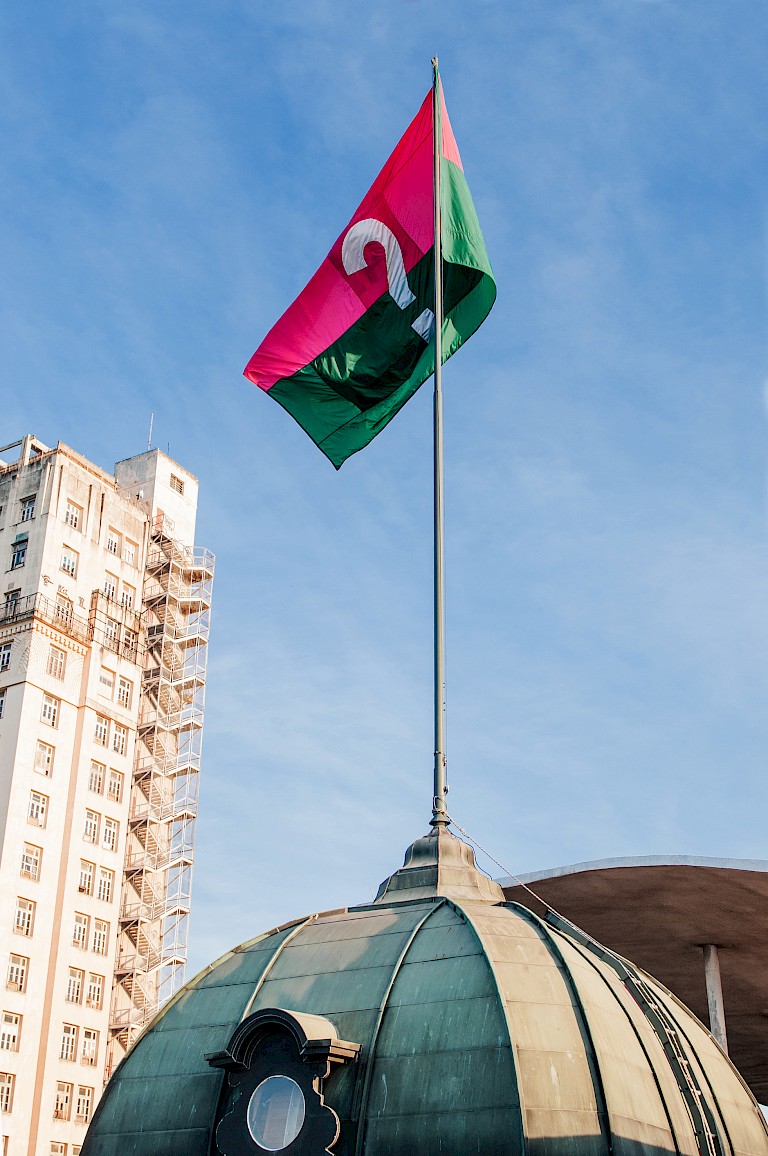 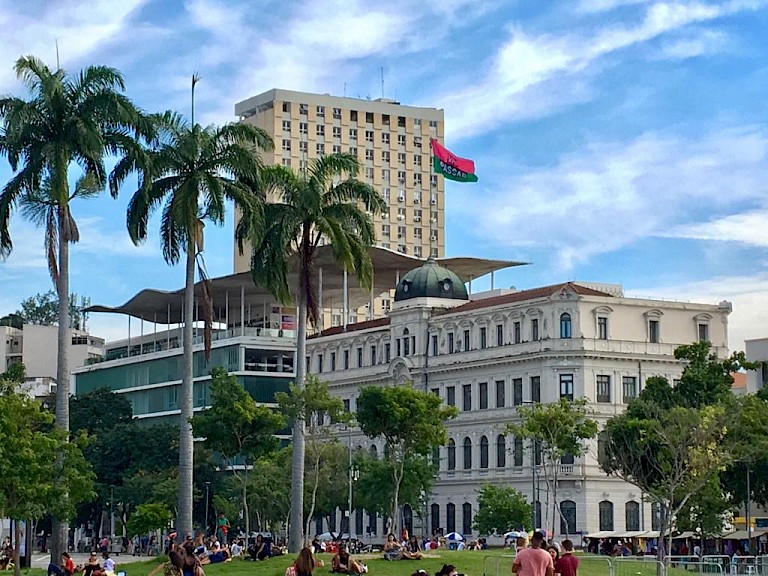 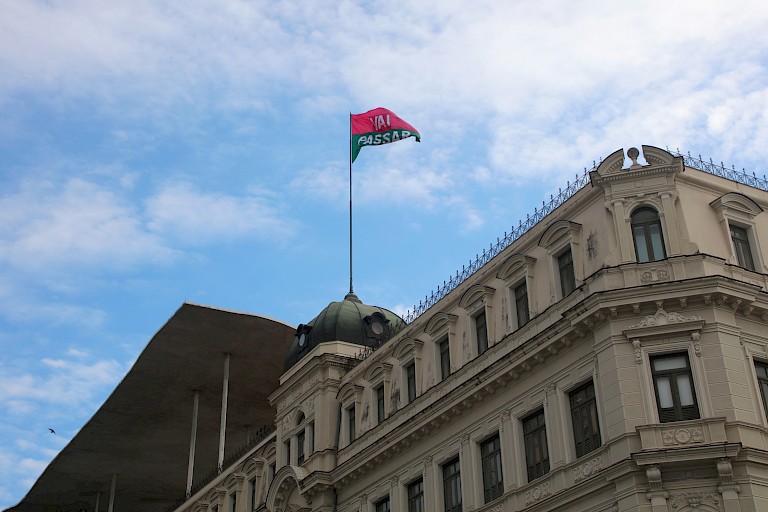 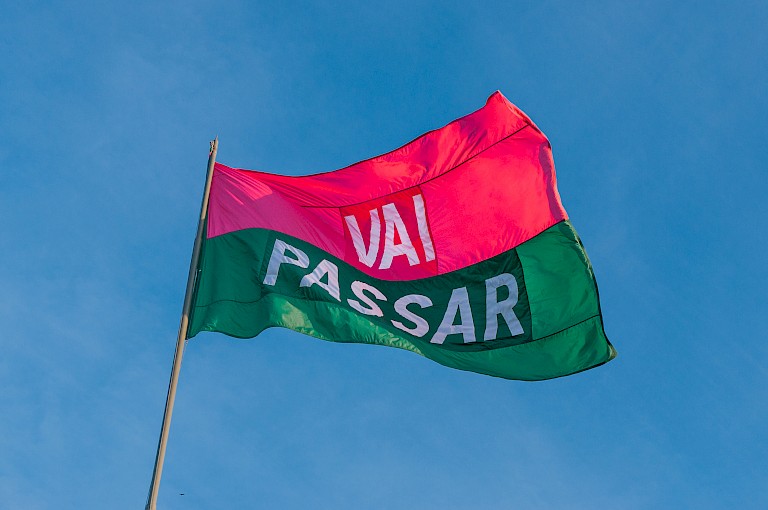 The flag was met with resounding approval from the public in Rio who felt great empathy with what the flag was asking. Creating a sense of shared common endurance by promising that this too shall pass it additionally provided a call to action. By inviting people to question when will this pass, people were pushed to take an active role in changing the status quo.

The context responsiveness of the flag was made possible by Chaves’ intimate knowledge of Rio and its internal culture and politics. An acute awareness of what was being felt by the public both with regards to the political assassination and the assumption of the new president came together to produce a work that artfully reflected both.

The employment of the school of samba colors and the reference to their music composed that year was a calculated risk based on the knowledge of the frequent success of samba schools and their subtle political undertones.

The location of the flag, atop the MAR which is located in a newly renovated part of Rio, enabled it to be received by a great many people. Located in a busy square in the heart of the downtown, thousands of passersby came in contact with this public piece. These thousands were especially profound when they were in the form of protests and demonstrations which often took place in that square.

The flag as a backdrop to such actions is a beautiful and powerful gesture of unity in the face of oppression and resilience in the face of unending struggle.