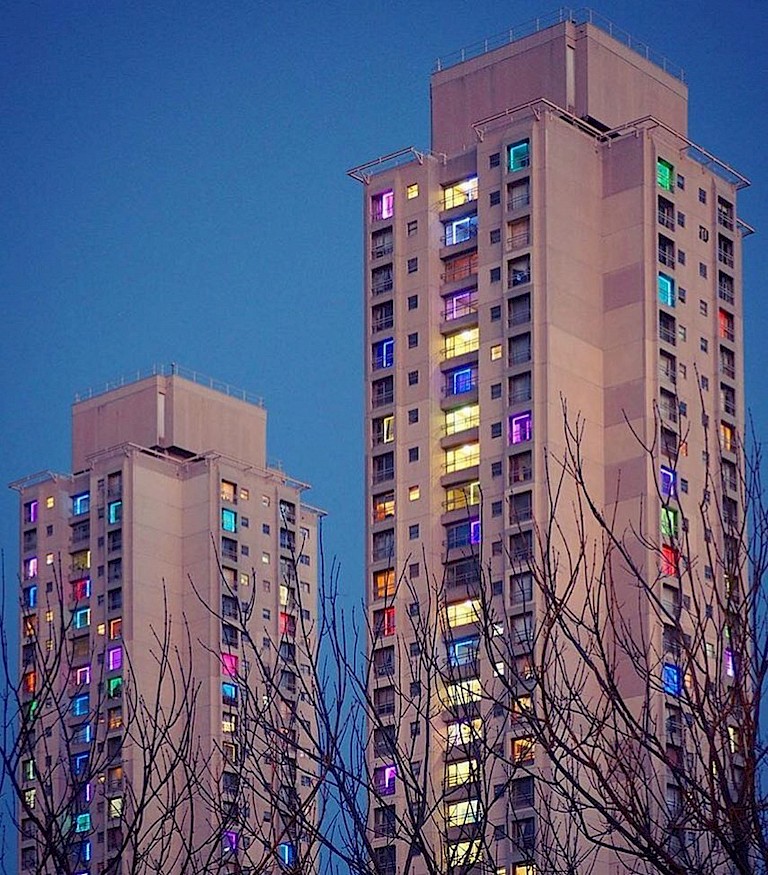 Late 2015, The New South Wales government announced their intent to redevelop the 40-acre estate, by displacing thousands of elderly, disabled and low income people who lived there. The community of Waterloo have express their protest and solidarity regarding the upcoming change. Through coloured mood lights the residents organised a series of social actions. #WeLiveHere2017, has become a collective statement of presence that opened discussion and new actions about the importance of affordable housing, by giving voice to their inhabitants. A documentary was also realised to express the powerful, spontaneous desire to put a human face to rapid urban development.

In late 2015, the New South Wales government in Australia announced their intention to redevelop a 40-acre housing estate on the periphery of Sydney’s CBD. The redevelopment would involved the destruction of several apartment buildings built in the 1950’s as a public housing estate - low rent affordable housing in the city centre, administered by the local government, as part of the governments commitment to provide cheap accommodation to those most in need - the poor, the elderly, the disabled, those down on their luck through no fault of their own. Redevelopment would see up to 3600 people forcefully removed and relocated, while the area was redeveloped into a high density, mixed-use, private/commercial development, with only a small proportion of the apartments earmarked for the original tenants.

With tenants being told to prepare to be relocated, many having no idea where to go, tenants Claire Lewis, Becz and Marryanne Laumua conceived of the idea to marshal the residents to become part of a community artwork by lighting up at least 50% of the windows of the two tallest towers in the apartment complex, and put together a social media campaign to draw attention to their plight. Having never engaged any sort of social practice before, the tenants created the Waterloo Public Housing Action Group, appointed a group leader, applied for funding from the local arts funding group, Arts and About Sydney, had a small batch of informational flyers printed, and began campaigning the residents of the buildings to join in the project. They were soon joined by two documentary makers, Claire Lewis and Carolina Sorensen who documented the process, and social media strategist, Jamie Madden, who supported their marketing and media strategies.

They were also joined by local aboriginal community members and long time aboriginal land rights activist Jenny Munro. Munro, a veteran of similar campaigns to stop the removal of historically poor, aboriginal neighborhoods in preparation for the Sydney Olympics in 2000 and campaigns against the federal encroachment of aboriginal reserves, set up an outpost of the Aboriginal Embassy on the estate grounds, a sort-of drop in centre for community members as well as a organizing station, communal kitchen, and a visual manifestation of the community organizing response.

After several months of organizing, petitioning government, corralling media, and door knocking hundreds of homes, the event culminated in an evening of celebrations and music on the grounds of the housing project to celebrate lighting up the buildings.

Five hundred residents in Matavai & Turanga towers chose a coloured mood light for their window to express how they feel about the changes, to raise awareness of this important community and give them a voice in the lead-up to the release of the government's masterplan. On 9 September, 2017, the buildings were lit up, despite government protestations, and the event was attended by hundreds from the surrounding community.

To date, the plan to destroy the buildings and build new developments, and the metro station extension that precipitated it, has not come to fruition, yet, at June 2020, a new plan to remodel the area into three separate precincts, with a mixture of community housing and private homes, which would still leave up to 2000 residents unhoused, was being proposed.

The WPHAG continues to meet with the Independent Advisory Group convened by Department of Planning, Industry and Environment who will be providing independent advice to the Department & Minister Rob Stokes to guide their approval of the Waterloo South Planning Proposal, as redevelopment in some form is certainly inevitable.

At the heart of the #welivehere2017 social action is questions of access, equity, and inclusivity in urban planning and in the modern social contract. The Waterloo Housing Project represents an early, and some would say, outdated form of social responsibility, built at the tail end of the social welfare reforms that washed across the Commonwealth after World War Two. As these social reforms were dismantled, most prominently under Thatcherism in the UK and Reagan in the US, and the neoliberal economic agenda was adopted and replicated across the Western world, social programs such as universal healthcare and social housing were increasingly under pressure. Successive right wing governments have eroded social housing stock to emergency levels - in Australia, almost 200,000 people are currently on the waiting list for social housing. What remains is under further pressure from property developers looking at what is now prime real estate in the outer suburbs of most major cities, while governments are increasingly expected to free up these so-called “underdeveloped spaces” to aid in getting properties onto a market that is facing severe shortages - while doing nothing to alleviate the multitude of issues that actually contribute to the housing crisis (investment properties, ghost owners, Airbnb).

#welivehere2017 further raises issues of poverty, addiction, indigenous rights, discrimination, and the reconstruction of collective action. What is interesting about the project is that it began as a small community art project and grew as a response to evolving circumstances, starting with a few people and no budget, to a community project of hundreds garnering headlines no the national stage. It highlights the opportunities for marginalized communities to reclaim social space, in this instance in the form of monumental architecture, and repurpose it as civic capital to challenge the privatization of such capital in a few hands. What has been fascinating about this project is that as a consequence of the national conversation, the state’s top-down masterplanning process have been countered with multiple counter-proposals drawn up by the tenants. The space in which the tenants and their local architecture allies have gathered, the Future Planning Centre (FPC), was established by the Waterloo Public Housing Action Group, and they are the only non-governmental group who are able to submit alternative plans to be integrated into the final masterplan. Through the FPC, alternative methodologies of inclusive community consultation have been trialled and demonstrated. These initiatives have attracted support from local developers, architects, and students who have seen value in aligning their skills and knowledge with the values of the community.